I have been interested in guilt for a long time. I think most people are. We are not guiltless. I refuse to believe that anyone can completely let go of guilt. Shame is another thing altogether. But guilt and shame do go hand in hand.

Me: smiling in the face of adversity - or: completely not giving a shit

What can one woman do? I am a woman without shame for a lot of people. They see me and they see no shame. But what do they know? The burden of my guilt and my helplessness is my own to bear – and so is my shame.

I have lofty justifications for what I do. I cannot claim to be pompous and self-satisfied but I am reasonably (and unreasonably) certain about all the choices I have made. Yet, I cannot explain my weariness. Why am I so tired? I don’t even know what to feel. Perhaps, the world is beyond my understanding afterall. I spent so many years trying to be aware and conscientious and I learnt compassion somewhere along the way. This fatigue is inexplicable. Everything that happens isn’t my fault!

Sometimes I feel compelled to make work about anything that would make a difference. But my heart gives up. I feel mildly retarded for being so passive in a world that is crazy. Should I have to?

Here I am, with so many questions. And tired. So tired.

I believe in love. I think it’s just fine.

(Thank you, Dave Matthews, for changing my life with Crash into Me) 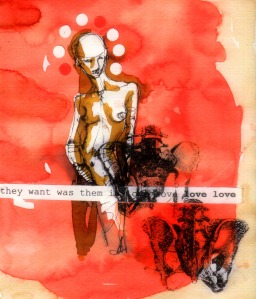 I realized today how talking about anything sexual freaks people out. I don’t think it’s sex that bothers them – it’s talking about it. I mean, they don’t mind making jokes about it, sending silly/funny texts with sexual content, implying that it exists…they just don’t want to talk about it like it’s real. Maybe if they talked about it then they’d stop having weird issues about it.

When will they get over the shame? I remember obsessing about shame a few years ago. I believe it might be conditioning that makes people feel this horrid shame when it comes to sex. It’s real and it’s normal and there’s nothing to be ashamed of. But that’s easier said than done (no pun intended). I have noticed how only the marriage contract somehow absolves people of the shame of sex itself. And even then they can’t talk about it normally. Without the damn contract it can’t even exist.

I was talking to my brother today and listening to his latest on his sexual escapades in the city of lights (he moved a few months ago) and all I could think of was how the lady in question was pushing her weird guilt on him. She is obviously confused about sex. She is obviously confused about why she is doing it at all. It bothers me. Why cause discomfort because you’re confused about something which is natural and normal and completely real? Its not cerebral, really. Its not rocket science. Its not intangible and hardly something you write a deep and meaningful treatise on. Its sex goddammit!

And then in class today…the poor kids are trying to express themselves. Being a mind-corruptor (in the words of some of my esteemed colleagues) I push them (gently, I hope) to face their physical reality. I am digressing somewhat from sex, but I feel this is connected somehow. They are painting bodies without feeling any connection to flesh. Is it the shame and guilt that keeps them from feeling the body as it is? It drives me mad sometimes. But then I can’t force them to see until they do. I can only nudge a little and see if they find their way to wherever they are going.